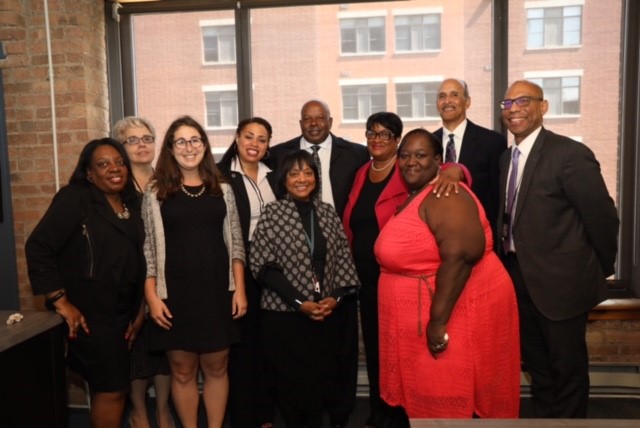 Access Community Health Network is pleased to announce that the federal Health Resources and Services Administration (HRSA) recently awarded the organization $175,700 to support its substance abuse and mental health services.

This award will allow ACCESS to continue to grow and sustain its Medication Assisted Treatment (M.A.T.) services and its integrated behavioral health strategies, which include opioid abuse treatment, prevention strategies and coordination of intensive services with each patient’s primary care provider and behavioral health consultant. This combined effort is crucial in addressing the ever-increasing opioid crisis in our communities.

“Addressing the link between substance abuse and mental health is a critical focus for ACCESS,” said Suzanne Snyder, ACCESS Director of Behavioral Health. “With this funding, we can continue to invest in our integrated care delivery model to support the increased behavioral health needs of our patients.”

ACCESS serves more than 181,000 patients each year in communities throughout the Chicagoland area. Many of these communities are underserved and are disproportionately affected by mental health issues. A recent Gallup Health Index survey found that people in poverty experience depression at twice the rate of the general population, and while suicide trends have been decreasing for white children, they increased significantly among African-American children between 1993-97 and 2008-12.

The influx of opioid abuse among community members is also widely known. Statistics show that between 2002 and 2013, the rate of heroin-related deaths in Cook County – where ACCESS has the majority of health centers – increased nearly 13-fold, from 0.4 to 5.4 per 100,000 population, compared with the national growth which “only” tripled in the same time period.

Approximately four percent of ACCESS’ patient population has a serious mental illness diagnosis, higher than the national average. Nearly 8,000 patients have been diagnosed with anxiety, including PTSD. Nine thousand patients have depression or other mood disorders, and 8,000 have a diagnosis for other mental disorders.

ACCESS Westside Family Health Center patient Angela Scott has been a M.A.T. patient for two years and is excited about her progress and a new outlook on a life of sobriety and a future as a Certified Drug and Alcohol Counselor. “Since I was released from prison years ago, I have always wanted to become a counselor and help somebody else,” Scott, who also mentioned suffering depression, said. “I know that there are a lot of people like me, who feel as if they don’t have anyone to turn to or nowhere to go. I want to let people know that they can get through this. Without ACCESS, I would never have done the footwork needed to complete school.”

“It is good to see a tangible connection between HRSA’s funding to ACCESS and the direct impact to their services. You can’t put a monetary amount on these personal stories of recovery,” said Tamara Cox, HRSA Acting Regional Administrator/Deputy Regional Administrator, Region V – Chicago.

About Access Community Health Network
Designated as a Level 3 patient-centered medical home by the National Committee for Quality Assurance (NCQA), ACCESS offers patient-centered, preventive and primary care services to more than 181,000 patients annually.  Through its investment in technology to further improve patient care and engagement, ACCESS has also been recognized by HIMSS at Stage 6 for its adoption of its electronic health record. With 36 Joint Commission-accredited community health centers located throughout Chicago and the surrounding suburbs, ACCESS is also one of the largest networks of community health centers in the nation.  For more information, visit: www.achn.net.